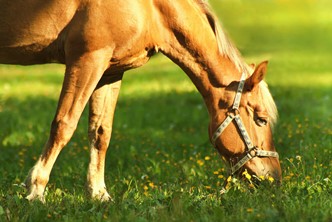 This is an especially important factor in field studies, where access to freezing or refrigeration may be limited or non-existent, resulting in samples remaining at room temperature until transport to the laboratory, the authors state in the article summary. The study’s objective was to investigate the effect of sample storage at room temperature for up to 96 hours on the fecal microbiota of healthy horses. Results revealed that storage of equine fecal samples at room temperature for up to six hours before freezing had minimal effect on the fecal microbiota, while longer term storage at room temperature led to alterations in the resident bacterial population. When ultra-low temperature storage conditions are unavailable for immediate freezing, equine fecal samples should be frozen within six hours after collection to minimize storage induced alterations in bacterial composition, the researchers said.

Bustamante is a second-year ophthalmology resident at UF and Plummer, her mentor, is a professor of ophthalmology. Gomez is a former assistant professor of large animal medicine at UF, now at the University of Guelph, Ontario, where coauthor MacNichol is a graduate student.

As part of both the Institute of Food and Agricultural Sciences and the Academic Health Center, Veterinary Medicine is dedicated to advancing animal, human and environmental health through teaching, research, extension and patient care.

Need animal care? Visit the UF Small Animal and Large Animal Hospitals. From dogs, cats, birds and exotics to horses, cattle, llamas, pigs and many other large farm or food animals, our experienced veterinarian staff is ready to assist.